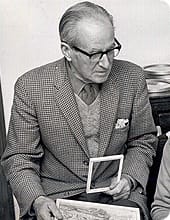 At the time of the 1891 census, three years before his birth, Norman’s family lived at Dover Lodge, Bilton Road, Rugby. He had two elder brothers, Geoffrey born in Argentina and Sydney in Cornwall. Norman’s father, Henry, was a Portland Cement Manufacturer born in Bombay. His mother, Katherine hailed from Rugby. Norman Edyvean-Walker, himself was born in Rugby on July 13th 1894. By the time of the 1901 census the Edyvean-Walkers had added two more children,Cicely and Horace. They now lived at 75 Addison Road, Kensington, London and had four servants.

Norman had moved away from Rugby with his parents and was educated at Tonbridge School, before returning to Rugby to begin his legal career, articled to his uncle, Mr CH Fuller, in 1913.Upon the outbreak of The First World War, he enlisted in the Royal Fusiliers and, commissioned in 1915, was wounded at the Battle of the Somme in 1916. He was to become the Warwickshire patron of the British Legion.

Between the wars, Norman returned to Rugby to pursue his legal career. He became a senior partner at Fredk. Fuller and served as an independent Rugby Borough Councillor from 1932-1938. He married Stella and became the father of one son, Desmond, and two daughters Cynthia and Stephanie. Desmond writes to us occasionally.

At the outbreak of The Second World War he joined the RAF and became a Wing Commander. Unfortunately a bout of pneumonia cut short his active service and he had to be content with a mainly administrative role, to which he was very well suited by profession. After the war he took a keen interest in the rehabilitation of former prisoners of war and undertook charitable work on their behalf.

Stephanie Edyvean Walker-Rolfe is now his only surviving daughter. In later life he had three grandchildren, one of whom, Stephanie’s daughter, Wendy Rolfe- Dunham has recently been in touch with us. She is a well known flautist. Here’s a link to her online biography.

Norman was a proud Rugbeian, never more so than when made an honorary freeman of the town in 1969. He was a most prominent local townsman who forsook his pre-war political interests in favour of voluntary and charitable service to the people of Warwickshire and Rugby. He became one of a number of Deputy Lord Lieutenants of Warwickshire, appointed on 16th July 1952 by the then Lord Lieutenant, The Rt Hon Lord Willoughby de Broke. He remained a Deputy LL until his death on 1st January 1974.

In the mid 1960s Norman made the gift that started the Edyvean Walker Travelling Scholarship.

Norman and Stella lived at Little Wood, an Elizabethan style mansion on the Rugby- Dunchurch border and built in the early 1930s. They were dedicated gardeners and regularly opened their gardens to visitors. Stella was a local amateur artist and many of her paintings were composed at Little Wood. This interest led the Edyvean-Walkers to become prime movers in establishing the ‘Best Kept Village in Warwickshire’ competition, which began in Rugby.

In 1957 the then Evening Mail did a piece on Stella. She had been Deputy Centre Leader for the WVS (Women’s Voluntary Service) and was credited with organising Rugby’s Meals on Wheels Service.

The Edyvean-Walkers were very closely associated with the ‘League of Friends of Rugby Hospital’. Prior to the creation of the NHS Stella had been Treasurer of ‘The Linen League of St.Cross’ Norman served as Chairman of the Coventry Hospital Management Group form 1961-67. A library at St Cross Hospital bears their name. The photograph on this website features Stella and Norman just after she had raised £1,200 when President of the League of Friends, through the sale of some of her paintings.

On 14 January 1974, 600 people attended his memorial service at St Andrew’s Parish Church. The Bishop of Coventry read the lesson and the funeral address was read by Canon A Partridge. Norman’s memory lives on through his gifts and benefactions. Edyvean Close in Bilton bears his name. Fredk Fuller, now Fullers Solicitors of Albert St continues its involvement with the Travelling Scholarships. There is a sheltered housing complex in Nuneaton and the Library at St Cross. He was a truly remarkable Rugbeian.

David Lindop was born in Wolverhampton in 1932 and grew up in Stoke on Trent. He went to school at St Joseph’s College there. His future wife, Margot, though eight years his junior, knew him well because their parents were friends. She attended nearby St Dominic’s College and remembers at one time going back to David’s parents for her lunches. David and Margot were childhood friends, who became closer as they grew up and would marry
in 1961 in Alsager, Cheshire.

From school David took up a place to read Law at King’s College, London. Thereafter he did two years National Service in the army serving as a 2nd Lieutenant in Austria. After completing National Service he returned to England and, as a Member of Gray’s Inn, took his Bar Finals in London.

His first job was with a law firm in Cardiff. Whilst there he sang with the Cardiff Cathedral Choir. Next he took a post with the Army Legal Service. In 1961, about to get married and fearing years of peripatetic postings, he left the Army again and took a position with Spiller’s, the well known millers, only to move, ironically, in quick succession to offices in The Wirral (Hoylake), Bristol, Stoke, Yorkshire, Lancashire, Hoylake again and then Liverpool.

During this period David and Margot began their family and were joined by Debbie (1962), Claire (1963) and finally Sarah (1966). Stability was urgent and it was in 1970 that David came to take up a position in Rugby with Rugby Cement. He was to stay there until his death in 1986, serving in his latter years as a dynamic Company Secretary. The family relocated to Aston Flamville, where Margot Lindop still lives.

David was very active in Rugby’s professional networks. He served as Chairman of the Chamber of Commerce for a time and took a passionate interest in helping to interest young people in schools and universities in careers in industry. He became involved in the local youth arena, working in partnership with the police and other statutory agencies to help disaffected pupils. He also found time to make links with Brooke School for Children with Severe Learning Difficulties.

Outside work, David was a keen sportsman and sport watcher. His main interests were Rugby Union and Cricket. The family maintain a dedicated interest in the fortunes of Leicester Tigers. David loved to attend Test matches and would himself turn out for his works team, the Crown House and his village team. He was a churchwarden and Chair of the Parish Council.

At the time of his tragic death in a car accident in February 1986, David was at the peak of his career. He was just about to serve as Chair of the West Midlands Regional Chamber of Commerce and would undoubtedly have contributed very much more to enhance opportunities for young people in Rugby, had he been allowed to do so.

David and Margot’s daughters, Debbie and Claire both went on to train as Norland Nurses. Debbie now runs a day nursery in Suffolk and with her husband Richard has a son and a daughter,James and Charlotte. James has represented his country at sailing. Claire currently works as a teaching assistant. With husband Robert, she also has a son and a daughter,Ben and Emma. Both have attended our prizegiving awards.

Sarah, the youngest daughter of the family, has to some extent followed more closely in David’s footsteps. She is also a member of Gray’s Inn, called to the bar. She works as a barrister in London and spends a lot of her time overseas.

Debbie and Sarah are now trustees of the charity.